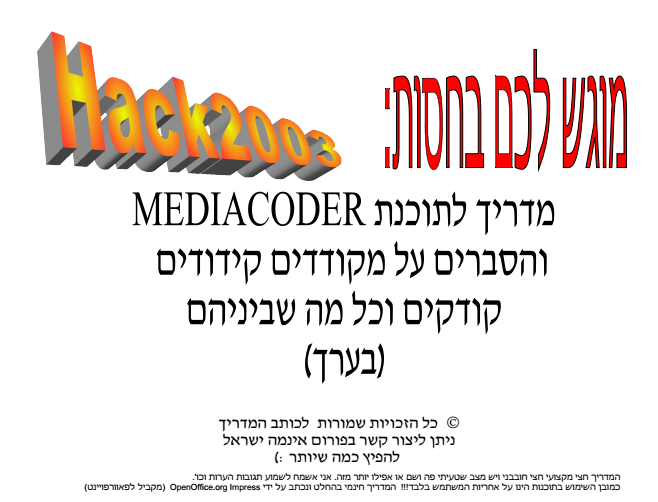 About a decade ago I wrote a tutorila in hebrew on the usage of MediaCoder which is one of the most advanced video+audio encoder\decoder exists. It was published in hebrew (my native language) due to the big demand of teenagers in my country for knowledge in this subject.

I was asked so many times “what?” or “how?” or “why?” and  many other questions which I found myself answering more then once and still are answering on many questions in the subejct daily by my surronding friends.

The core of the article which is video and audio encoding and decoding basis are starting at page 18.

How accurate Statistics are?
The SquidBlocker Way. 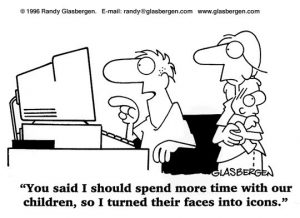 I have been working with psychologists and psychiatrists in the last ten plus years and an idea that emerged from all these sessions:

The basic idea was a bit raw and wasn’t mature enough to my taste. It was composed of a mathematical function that always results in the right answer\result whether the patient was mentally ill in the spectrums of Schizophrenia to Bipolar Disorder or “Normal”.

The idea could be very nice as a solution for a Mathematical Problem resolution but wasn’t enough to decide a human life fate. There is a need for a much more robust idea\concept then the non-mature one. One of the big issues with their basic concept was that I saw the mathematical equation that the MD’s were using to describe the concept and I saw how simple and unrealistic the it was. If the way to find out if a human is mentally ill is so simple then the human mind is much lower in it’s complexity compared to a flower or piece of grass or paper. As soon as I started proving the ridiculousness for the idea it was taken off the board. I was so happy at the time that so many lives were spared from a false positive match for a Schizophrenia and Bipolar Disorder.

But it’s just not enough to state “it’s not good” there is a need for an alternative! If you claim that something is missing couple things you must understand that some alternative should be offered, and if not a full mature alternative then a simple enough new direction should be the basic alternative.

The professional Therapists, Psychologists and Psychiatrists I was working with was thriving to get an idea which will help them analyze and treat these patients. And while it’s nice to use a brand new solution or formula that will assist them I believed that there are existing concepts and tools which can help us to grasp the patient state without re-inventing the wheel.

The basic idea is to find the right tool that will help us analyze the patient in a way that he will want to participate in the therapy process. The conflict which the therapist\psychiatrists  is standing in-front of is to choose the right “poison” that will help the specific patient. For example a Lithium consumer can be spotted in a second by a smart\experienced enough person. And the MD explained to me: “Do you see the color of his skin on the face? this is closer to white then to the red of flesh.”(this is one of the ways to see it)

I was amazed by what can the human body reflect to others. And then the decision became much more complex since we need to both protect the patient from revealing his “secret” of being a psychiatrist patient and also to try and find the right analysis let alone treat him. There are some “easy” cases which the basic concept of analysis will catch but most cases are much more complex to analyze find and treat. Also once you have analyzed the patient it’s pretty hard to change this “verdict”. In a sense it’s actually a matter of life and death when looking on how the verdict will affect the patient therapy, treatment and life.

At that stage the group of therapists revealed to me that they had failures while treating patients and for some reason there where patients which choose to take the path of “Another Life” by killing them self in some very artistic ways. A thing which the modern world accepts as a failure of treatment compared to the Japanese old tradition that defines such an act as an honorable and noble one.

I admit that while working some basic concept of analytical model I have seen in real life how a kid tries to take his life using a sharp razor blade, yes the one for the hairs in the legs or face. At the time I understood how much we need to be careful with blades!!!

In my culture there is a custom to not pass or use a blade on specific areas of the body what so ever. I was wondering for ages about at least one reason for why we were ordered to not use a blade on specific areas of the body. The answer was reflected to me from reality, from this kid that was trying to use the blade to take\end his life with this simple tool. This simple tool was in use in his house by his parent and was so “daily” that it was simple for the kid to think about using it for whatever he was thinking about.

This lecture taught me about the power of giving “Example” by our-self to others. We were given the gift of life and for a very long time I wanted to build a tool that will help others and specifically to these who are in distress, man’s or woman’s !

In order to get to the right answer I had to learn couple new sides of science in life since I was young and didn’t had enough experience compared to the MD’s I was working with on the project.

There is a known comparison between a CPU to a human thinking or mind which led me to a new kind of expression. We can use the Computer Science world and terms to express ideas the same way that a mathematical equation can express ideas and concepts.

Using this analogy\methodology of CS I tried to categorize CPU, DISK and RAM as a model of the components in the human mind and body.

As a therapist told me: We need to evaluate these three basic components and couple others like the above stack to try and understand the patient mind. Some CPU’s need a stress test while other’s DISK or RAM, depends on the patient. I decided to try and write a concept (in the form of a software) which will try to use the lowest level of resources in the process. Saying this would also mean for both my budget aspect of things and the expense which the client\patient needs to invest on it.

I will jump couple steps ahead since until now it’s kind of an “Assembly” level of things and will move forward to the actual result.

SquidBlocker!
Thats one of my answers.

I took the time learning the “Squid” way of things while comparing it to Varnish, Nginx and many other web and web caching services. They all seems to have a special way of expressing what’s good should look like. Eventually I decided that I should not invent the wheel but learn from the best and based on them make a move with a tool on the public chess board for the favor of the disabled mind’s in our world.

First I must admit that a disabled mind can be a result of many things but for many patients a disabled mind is a temporary situation compared to these who have physical disability and which for them I and many others do not have any way of helping mentally. For these I cannot help I am devoting a minute every morning concentrating my body BTU and embedding it with pure good using some old “chants” that my ancestors left for me as a tool which worked for them when they wanted to help others but couldn’t do a thing for them because of the distance or the limitations of reality.

So for these which I can help I wrote a filtering DB which in it’s raw form has only three states of definition “white”, “black”, “other”. Using this DB we can categorize url’s on the Internet as “looks good” or “looks bad” or “unknown” which will mean there is no verdict about the content yet.

This DB is a very robust and delicate tool that was designed to eventually be a weight based rating DB(black=128, 0=white) but it takes time to accomplish this goal(I have funds but more are welcome) so first something to start with and later a more perfected product to come.

How SquidBocker is being used as a
“Therapy  Assistent Tool”?

Each user is assigned a unique SquidBlocker instance and an Internet Surfing session is being started with the patient. Depends on the domination of the patient on the Internet Surfing Art we start with either a basic guided session which will have a leading subject in mind. Then it will follow a non-guided surfing session. In the guided sessions we are teaching the patient how to categorize the site\url and these can be:

Every session have a “summary” of what we had and what we know now and also what do we understand from now on based on the session. It’s a journey into the depth of the human\patient soul in an interactive way using the WWW. This is not the right place to add pornography to the picture since it’s one of the most ridicules forms of content in the Internet compared to many others but it’s good to know that some do not understand what pornography is good for and what it’s bad for. Using a SquidBlocker categorizing session we can achieve one of the most amazing achievements in a therapy process.